December 31, 2018
Nowadays everything is Cloud Native; everybody talks about CN tools, frameworks, solutions, and so on. On the other hand those tools totally changed the way we design, develop, test and release modern applications. I think the number of issues which we solved with the new concepts is equal with the number of new challenges, so in short we simply shoveled problems from one hole to the other. Many new tools appeared on the market to make developers' life easier by
Next to the new tools, new programming languages such as Metaparticle, Pulumi or Ballerina have been born. The last one had my attention because others are extensions on top of some existing languages, while Ballerina is a brand new programming language, designed from scratch.
My first impression of it was this language is a creature of Dr Frankenstein because it is a mix of 4+ existing languages with a few unique and interesting features. But first let's talk about what CN programming language means?

First of all there is no clear definition however here is my personal opinion. Beginning with the most important quality, it has handy support to create and publish (micro)services easily. It must contain REST and RPC connectors with data representation/conversion to communicate with other services language-natively. Circuit breaker, client side load balancer, fail-over and retry logic are also very convenient features. And finally it has to support containers and orchestration platforms like Kubernetes. The same application has to run locally or in the public cloud.

The language itself is a compiled, transactional, statically and strongly typed programming language with textual and graphical syntaxes. The compiler is written in Java. It generates an intermediate byte-code, which looks like Java but it isn't compatible with JVM. The byte-code runs on Ballerina Virtual Machine. The first version was in Java with GC, but later on they re-implemented the VM and switched to a register based technology (for more information please visit this page). The language has textual representation a.k.a. source code, and an editable flow diagram view (image from dzone.com). 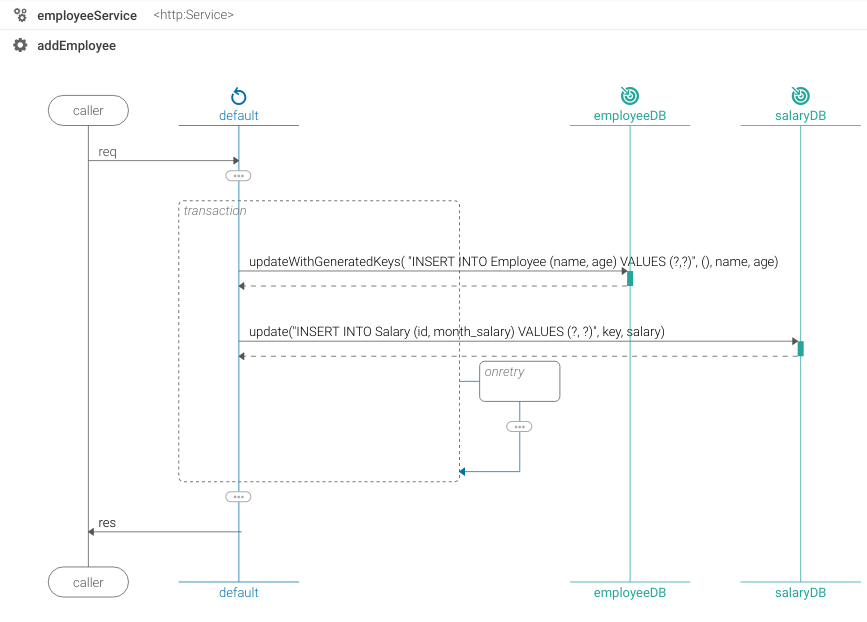 If you are familiar with Java, Groovy, Go and Python you will be familiar with Ballerina. Similarities are:
I created a small application to demonstrate the language itself. My goal was to fill the project with as many features as possible, so please forgive complexity of examples. The application in nut shell: it exchanges gold to different currencies (ratios are hard coded, so use at your own risk :D). So we have 3 grams of gold and it calculates the best price for example in USD. It has a CLI interface, and uses 3 services to calculate the final price. Two of them serve the exchange ratio and the third one calculates the price.

First I would like to introduce the simplest exchange service, which contains only the basic language features.

This was obviously easy. Let's implement the response generator.

The first service is ready to use.

As I mentioned earlier, the CLI tool talks with two services to figure out the best price for exchange. The previous version was the simplest one. In the next section I want to present an enterprise grade version of the same service.

Enterprise version of the exchange service is done. It's now time to create the calculator service (only multiply implemented)

The final part of the application is the CLI client. It connects to the exchange services parallel, finds the best price and than calls the calculator service to multiply the amount of gold with the given ratio.

At that point the hard job is done. All of the services are ready and the command line interface glues the functionality together. We can run the whole application on our local machine, however we don't want to. We want to run our microservices on Kubernetes. Of course a CN programming language supports Kubernetes, so there is nothing else to do except annotate our services and Ballerina will generate all the Kubernetes resource descriptors, Helm charts and will build Docker containers in the configured registry.


I hope this introduction to Ballerina language was interesting for all. The source code of the application is available on GitHub. Ballerina by Example is a beautiful collection to learn the language, so don't forget to visit it. For development I used Visual Studio Code plugin which worked well including syntax highlighting, auto-completing, jumping to declaration, finding all references and debugging (rename was broken). Intellij IDEA plugin is also available in the marketplace. There is one important thing to mention about IDE plugins. They require Java 8, so be sure you set the right version of Java.

There are some other nice features which make the language more powerful. Here are just a few of them:
In my view the language is not production ready yet. I faced and reported a few issues during the dating, but it has great potential to be the first united Cloud Native language on the globe.

Popular posts from this blog

November 16, 2019
Kubernetes networking has some basic rules.  In short, every pod has to communicate to every other. Selecting the right network plugin for the cluster is a critical key component when planning and architecting a new cluster. Luckily there are great presentations and blog posts around the topic of Kubernetes cluster networking on the internet, but the available sources are very limited about how to connect external resources that aren’t part of the cluster into the mesh. It all depends on what we would like to achieve, so finally we have to glue the solutions together.

In this post I would like to tell our story @IBM about converting an existing node to become a full member of our Kubernetes + Calico network.
First of all we had to specify the main goals:
Make node full member of the overlay network External node needs a pod IP to be able to reach it like any regular pod in the systemThe pod IP must be listenable for services on the external nodeService discovery is mandatory for both …
1 comment
Read more

How to sign messages in Java and verify in Go

March 18, 2018
In my company we use Java and Go as our development platforms and of course sometimes those projects has to communicate with each other. In the current blog post i would like to introduce our solution to sign messages on the Java side and verify them in a Go service.

First let's talk a bit about the architecture. Our Java application spins up new virtual machines in the cloud, and the base image of the instance contains a small Go service. That service is the main entry point of our configuration management system, and we don't want to allow any operation from untrusted clients to modify nodes. Two way SSL with a signature in the request sounded fair enough to trust in clients. Both components are open source, we don't have any "secret" in the binaries, so we elected RSA asymmetric key pairs to generate and verify signatures. Java has the private key and Go has the public one. Time to go deeper.

mhmxs
Introduce myself in a few sentences is almost impossible, because i'm a father, a lover, a cyberpunk psy[trance] nerd, an anime fan, a race driver, jockey player. And lastly but not least i'm a software developer (NetOps engineer to be more specific), who infatuated of open source, community driven development.